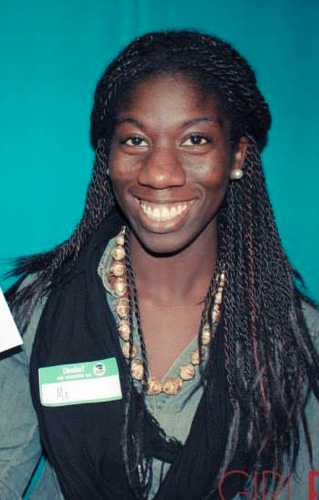 Modupe Alabi, or “Mo,” is a fourth-year student in the USC Annenberg School of Communication and Journalism. As a Communication major in Annenberg, she has focused most of her studies on  an interdisciplinary combination of cultural studies, entertainment media and social change.  She also pursues her passion for the arts with a minor in Communication Design in the USC Roski School of Art and Design.

At USC, Mo is involved in various organizations including InterVarsity Trojan Christian Fellowship, USC World Vision ACT:S, Annenberg Ambassadors and an intern for the USC Fisher Museum of Art.
​Mo is currently on an exchange program in Hong Kong, and is excited to learn more about a region that has captivated her and learn more about what it takes to make a developing economy successful.  Still, she deeply misses being at USC with her fellow Trojans, and looks forward to returning to share with the community and prospective students about her amazing four years at USC!

Hegemony is the perpetuation of a dominant ideology, usually by one social group over another. Orientalism refers to a contextualized form of Asian cultural studies that perpetuated stereotypes of the region as knowledge, which highlights the separatist concept of “us” and “them.” Hegemony and Orientalism interact in that Orientalist knowledge was created by Western cultural researchers, and long existed as the only frame of reference for understanding the area geopolitically termed as the “Middle East.” Through the dynamics of hegemony, Orientalism has been distributed as a ‘common sense’ understanding of the “Middle East.” Today, many attempts to look into aspects of “Middle Eastern” culture unknowingly continue to further Orientalism. One such occurrence is an exhibition titled “The Absent Portrait,” currently on display in Amsterdam. In Iranian markets, thick strokes of black ink cover any images of women featured on product packaging as a government-imposed form of cultural censorship. When British artist Philip Toledano discovered this blackout, he saw more than direct proof of the state of women, he saw artistic potential and repurposed the images for the series. Toledano practiced counter-hegemony, attempt to resist hegemony, as he sought to make a statement on the “twisted” government, however, it can also be concluded that he unknowingly contributed to orientalism in the process. Through an analysis of culture and representation, this paper will explore counter-hegemony and Orientalism, while touching on topics of gender, the body and the purpose of art.

A critical aspect of hegemony is the perpetuation of certain practices so normalized within culture it is thought to be common sense and often not given much thought (Gramsci, Cultural Resistance Reader, 65). In a Time.com article that reviewed Toledano’s exhibition, the author notes that the practice of censoring female imagery in commercial packaging is so commonplace in Iran that it can be considered “white noise,” (Reznik). It speaks to the larger practice of censorship ordained by Iranian government, as the article details that state authorities black out the images by hand. From this deliberate practice; one could deduce that women in Iran are subject to some form of oppression because of the direct removal of visual representations of the feminine form. Toledano responds to this with counter-hegemony in that he chooses to take these blackout images and put them on a canvas. Accurately titled “The Absent Portrait,” this act makes a point of displaying what government officials tried to erase, and is thus an act of cultural resistance. Though they were likely rushed, Toledano calls attention to the handiwork of the state authorities by encouraging viewers to notice the black brushstrokes and rhythms of the ink as they cover the would-be women. Toledano repurposes the work of the authorities by encouraging viewers to see the detailed blackouts as portraiture, and the authorities as artists painting an image of the very form they attempted to delete. Toledano’s work urges viewers to see what has been made absent. However, Toledano’s position also brings up issues of Orientalism.

Although Toledano set out to shed light on an issue of oppression and lack of fair representation for women, he added to the body of knowledge about Iran and the “Middle East” that propagates Orientalism. By isolating the images of the women from packaging and putting it out on display for the [mostly Western] world, he took an aspect of “Middle Eastern” culture from its context, and displayed it in a way that perpetuates the negative views the world has of the geopolitically-termed region. This proves one of the key struggles of counter-hegemony; the act of rejecting an imposed ideal often requires working within it. Toledano’s attempt to comment on the normalized censorship practices of the Iranian government required him to use and disseminate their imagery.

Furthermore, Toledano’s position and perspective adds to concepts of Orientalism. As a European man taking it upon himself to expose a condition of oppression in the “Middle East,” he plays the role of many historic imperialist powers that saw themselves as liberators. An excerpt from the exhibition statement on his web site reads, “I source original, censored packaging from Iran. Packaging in which the women have been erased … I remove the blacked- out figure from the surrounding image, and a transformation occurs.” In the tone and diction used here, it is as if Toledano implies that he is the cause of transformation. The statement goes on to read “-the censored figure becomes a portrait…of suppression,” and it is nearly reminiscent of letters sent home from Frenchmen during the occupation of Algeria.

Additionally, Toledano’s exhibition and attempt at counter-hegemony points at another aspect of hegemony: patriarchy, the belief that society is organized to privilege men. Again, Toledano calls out the work of Iranian state authorities for taking heavy measures to remove images of women as to not upset their concept of morality and the way women should be presented. But in Toledano’s work, the female form is also objectified, except this time it’s put on a pedestal and literally on display for all to see, instead of tucked into supermarket shelves to go unnoticed by passerby. This exhibition appears to be organized (and publicized by various media outlets), as Toledano shining a spotlight on “Middle Eastern” socio-politics, and how that is degrading to women, though his work further aids in dehumanizing them, as well as glamorizes their silent, darkened figures.

In page 52 of the “Orientalism” reading, Palestinian-American scholar Edward Said notes that “no Orientalist in the United States has ever politically identified wholeheartedly with the Arab,” although there have been “identifications on some level.” Toledano exemplifies these “identifications” when he is quoted in the Time.com article saying “The thing about the series for me that’s important to get across is that, yes, it is about women and it is about the Middle East,”he adds, “but it’s also very applicable to all of us, because all of us in every country live in a system where reality is twisted — whether it’s by religion or by government, there’s a certain amount of torquing.” Here, Toledano attempts to shed light on his efforts of counter-hegemony, one that encourages people to analyze the subtle censorships in their own societies. However, the fact that he made this public artistic statement by using the “Middle East” as an example further aids in perpetuating the region as the standard for “twisted” systems, and if people looked at their own society, they could—gasp—find ways that their world is not a far comparison as that of the stigmatized “Middle East.” This can be seen as what Said classifies as a “dehumanizing ideology” in page 52 of the reading.

Additionally, Toledano’s exhibit furthers concepts of patriarchy because he is a man who took it upon himself to highlight the state of women. Though it can be refreshing to see a male raise eyebrows at the potential mistreatment of women in a society, it is still as if he is asserting himself as their savior; Toledano’s position as a man gives him privilege to talk about this issue without being quickly shut down. The artist statement on his web site also reads, “The censor becomes an artist. And the censored figure becomes a portrait. A portrait not of a person, but of absence. Of suppression. A portrait of a point of view. The censor, a person whose function is to erase, becomes the person who makes us see.” This statement puts him in the position of the one who created the opportunity for a point of view that makes women visible, though he did so in a way that still failed to give them their humanity. In “Introduction: Feminism, Western Culture and Body,” Susan Bordo points out that women are often quickly cast as bodies while men are given the position to be minds. This is clearly evident in Toledano’s piece as Iranian authorities used their conceptions when blacking out the images of women, and Toledano used his ideas to create the exhibit. Nowhere in this artwork is the voice of a woman, just a simple, subjugated figure constantly under isolation and objectification of men.

Overall, Toledano’s exhibition allows us to also question the purpose and position of art: though he clearly participated in many of the privileges that have allowed the blacked out women of Iran to be where they are so he could create this exhibition, his role as artist seems to give him a position in today’s culture that allows him to comment on this issue and garner the attention of the press. This sheds further light on the role of communication in culture, to share ideas between people. Though Toledano’s piece left a lot of room for error by nearly mirroring Orientalism, his work shines a light on the dangers and exclusion caused by “normalized” aspects of culture, succeeding in counter-hegemony.