A few weeks ago, a Friday, I finished a very long book that left me fuzzy with accomplishment. By Monday, I couldn’t remember what the hell I’d spent the past two and a half months reading. I had to get if off my chest. I phoned my brother.

“It was good,” I said. “But now I can’t remember what happened in the first two hundred pages. It’s like I started the book on page six hundred and fifty.”

My brother said, “So reread the first six hundred and forty-nine pages.”

I hung up and paced the room, opened the new book I had started reading and then got back on the phone with my brother. “But damnit, I’m an active reader,” I said. “Why can’t I remember what I read? Do you get me? I wrote in the margins.”

“Dementia? Alzheimer’s? C’mon. Of course you’re not gonna remember everything you read. It’s a heavy book. And you live in LA. That air’s bad for your brain.”

We talked about his new dog, Valentino, then the news on TV: the weather in Chicago was crawling out of a devastating blizzard one degree at a time. No one cared about Egypt again. There was a six-foot-five guy in Madrid who disappeared while walking home after being kicked out of a bar. No one’s seen him since.

“His parents are flying to Spain to investigate,” my brother said. “He’s student. He was studying abroad.” The conversation withered. My brother said: “Relax. Your memory’s fine. It could be worse. You could be hogtied in Europe.” And then: “Maybe you have a brain tumor.”

I hung up and put on the TV. Charlie Sheen was talking about banging seven gram rocks. Dying’s for fools, he said, and then later: What I’m harnessing now is absolute…focus.

Even though Sheen was completely out of his mind, he was also convinced he was completely fine. I felt the opposite, like something important was sliding out of my ears and nose. Like I had spent two months in a strange jungle-world made up of a thousand pages, writing all over its margins, and now that I was back home I had no idea where I’d been and what just happened.

My brother said, “If you hang up on me one more time, I’m never answering again.”

“Have you seen that Charlie Sheen interview?”

“He makes me miss living in LA.” And then: “Enjoy it. The weather here in the real world is depressing. I had to dig my car out of the snow with a garden shovel last week.”

“Speaking of rock stars,” my brother said. “I’m reading a Jim Morrison biography. Check that out. That’ll relax your brain.”

I said goodbye, waited for him to respond, and hung up on my brother for the third time.

That night I bought the Morrison biography on Amazon for six dollars. It arrived by mail six days later, and I started to read it, writing in the margins again, and wondering how long it’d take me to forget everything I was reading. There were stories about the chubby beatnik living homeless in Venice, going to topless bars, drinking thirty-six beers in one night and going on to croon and scream some of the best lyrics of my parents’ generation. Then he expired in a bathtub in Paris. I wonder if he knew what he was doing when he did it. Is someone already writing Charlie Sheen’s biography? In bookstores, I usually go direct to the True Crime aisle and then to the biographies. When I was little I camped in those sections because those were the only books with pictures that weren’t in the Young Adult or Children section. I could feel like a smart little kid reading those big books, like a little genius flipping through a four-hundred page book even though I was just looking at pictures. The mugshots and crime scenes, rock stars posing with the Dali Lama, politicians shaking hands with famous dead people. The pictures of rock stars and serial killers and politicians when they were my age, maybe younger.

But now I don’t go to the bookstore any more, I buy for cheap on Amazon. I think it’s better that way. Sometimes it’s daunting standing in the biography section. All that paper. All those three hundred page biographies. There’s a lot of people out there and only some of them get their face printed on the book that tells the story of their life. Charlie Sheen is completely insane: dying isn’t for fools, just for the one’s who don’t get in the biography section at Barnes and Noble.

If I can put a specific number alongside a certain story, still, it doesn’t stand to last. Jim Morrison: thirty-six beers. That might as well be one more degree before the ice melts off my brother’s front steps in Chicago. Or a six-foot-five guy who disappeared in Madrid, Spain. 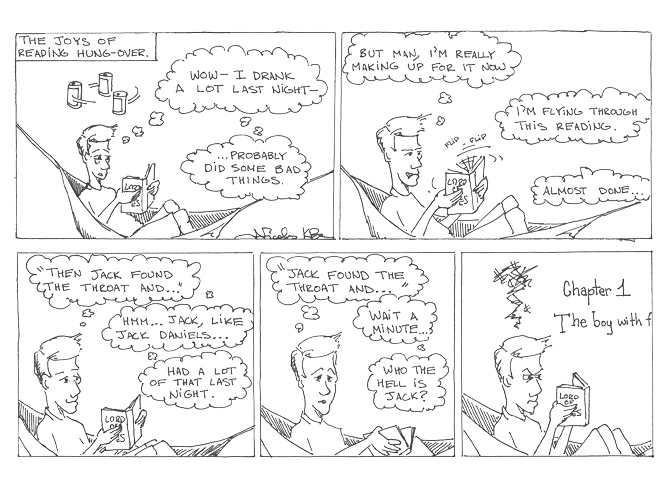