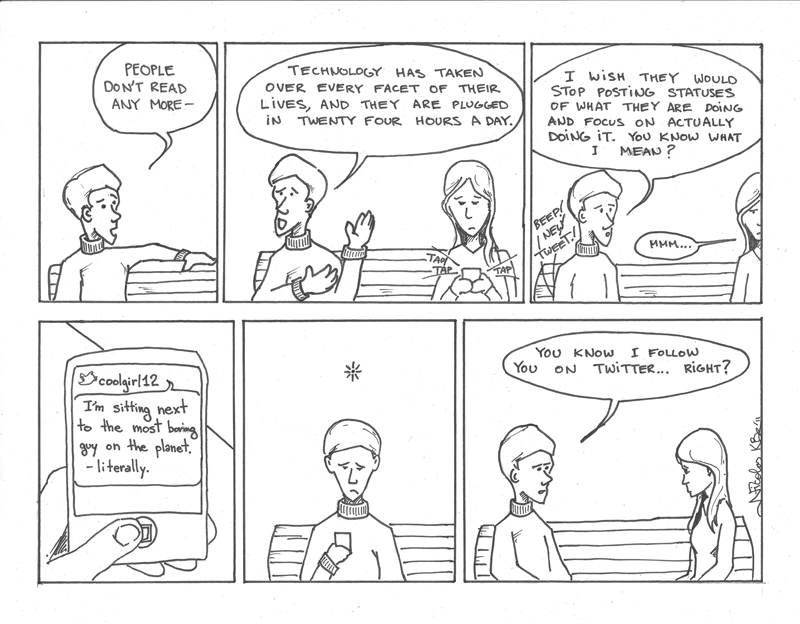 A Poem in Tweets

I had a really great tweet typed up, but it was 142 characters long, so I had to tweet this shitty one instead.

I was glad when I woke up on the wrong side of the bed this morning, because there was a cute stranger on the right side.

I bet someone tweeted a poem just like this already.

I tried to tweet my novel 2 sentences at a time… I had no idea you could be defriended on this site.

So what if the top of my hair is always messy? I’m 6’2” and the mirror in my bathroom stops at 6 feet.

My friend calls them twats.

I don’t have any followers. I’d trade a few of my dumber friends for followers.

You can’t get in fights with followers, you can’t be caught kissing your best follower’s girlfriend. I imagine followers to always be loyal and admiring.

Does anyone even read anymore?

I think people like statuses and tweets because everyone can show how smart, creative and unique they are.

Funny that the same websites remind us that everyone else is creative and unique too.

It is too easy to publish things now with the web, it used to be hard and things had to be good.

Now I can browse for hours reading, and not find anything worth repeating to anyone. Barely worth retweeting anyway.

Now you can communicate with millions without really connecting with anyone.

I feel like I run out of characters everytime I get to the point. Can you say anything worthwile in 140 characters?

I realized most of my tweets start with “I”. I feel like a douche.

I see a bleak future where people talk in letters and pound signs and a few douchey intellectuals in a coffee shop are the last guardians of four letter words.

If a tweet tweets in a forest, but it has 0 followers, does it make a sound?

There, at least that is one tweet they can’t use.