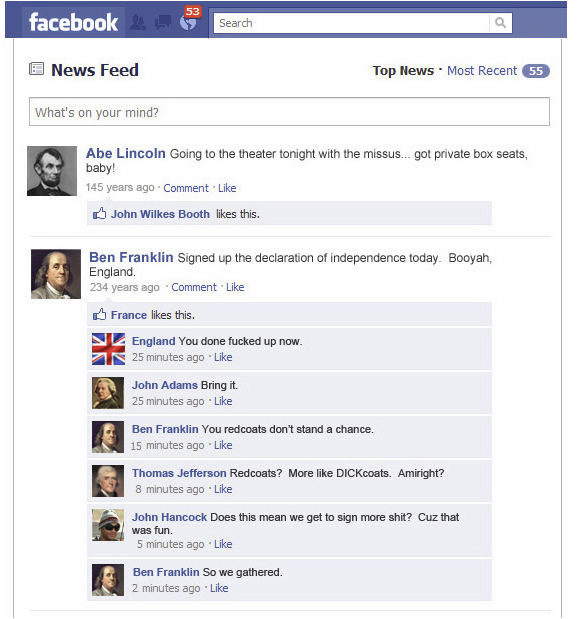 Ever since I found this gem a couple weeks ago via Twitter, I’ve been seeing numerous like-minded Facebook adaptations of history pop up on my daily strolls through cyberspace. For example, one I found yesterday features a status posted by Ancient Asteroid 65 million years ago declaring that (he? she?) is “hittin’ up earth today, if ya know what I mean.” Another I found a few days ago displays Adolf Hitler’s newsfeed, telling us that he is a “fan of Charlie Chaplin” and that he has visited Munich (via the “Cities I’ve Visited” application). The genre has even expanded into the realm of literature, with Shakespeare’s Hamlet newsfeed providing perhaps the most amusing moment of the set with its last entry “The Queen, The King, Laertes, and Hamlet are now zombies.”

All of these Facebook hacks creatively play on the banal character of the platform’s conversations – they are able to reduce world changing events and key historical figures to the petty bantering of rival frat boys. But even beyond this cleverness, what I find most interesting is why anyone would even choose to represent history through Facebook in the first place. In fact, the supreme irony is that Facebook (along with many of our other web applications) have a very complicated relationship to the archival impulse. Sure, Facebook records everything that you do in its space, saving it for posterity in the interest of generating advertisements specifically tailored to its idea of “your needs.” But is “archiving” a wall post or a status update the same thing as “preserving” it? How does one cite a Facebook post or a Twitter tweet? What happens when comments, photos, or even entire profiles are updated, annotated, and deleted? In the mid 90s imagination, the Internet was supposed to solve all of our old problems associated with history – by acting as an archive of all of human history, the web was supposed to preserve many more moments by many more people than ever before. It has done this to a certain extent, but the flip side to this archive fever is an inability to shape this excess of ephemeral and transformable information into any sort of historically coherent, static, or linear shape. While its easy to take canonized history from textbooks and port it into Facebook, I wonder if its possible (or even desirable) to take the emergent, multiplicitous histories of Facebook and put ‘em into old-fashioned printed books. These cute experiments remind me that digital technologies are always structured around a weird paradox – they involve too much and too little history at the same time.