The drama teacher points at Ryan, the captain of the football team, and says “Come up here, son.” Ryan smiles behind him as he climbs onto the stage. The drama teacher drops his folder and it smacks down on the floor. “Pick it up” he says, without smiling. Ryan looks back at the class once, picks it up and hands it back to the waiting teacher.

The folder is barely in his hands before he drops it again. “Pick it up,” he says. A look of surprise flashes across Ryan’s face but it vanishes quickly. Ryan bends over again, his face screwed into a “yes, coach” expression, and he hands it back. The folder hits the floor with the same resounding smack: Pick it up. This time it takes longer, the wheels are turning, this must be some sort of test. Another time still, and Ryan is frustrated.

Pick it up. He is going to punch the drama teacher, its only a matter of time.

Perhaps the drama teacher sees this inevitable course of events, because he turns to the class. “Conflict.” he says “There’s a reason why it is the heart of story. It is the most concise way to characterize. You know more about Ryan here than you would have known after three seafood dinner dates.”

“There is no room for extra fluff or illusions about the character. It is just like throwing an object against a wall. Picture a glass sculpture that has been expertly made to look like a ball of cotton candy. When you throw it against the wall, there’s a collision and it shatters, when it hits hard you find out what its really made of.”

In the drama teacher’s example there were two characters: the football captain, and the aggressive jerk that he played. Is it possible to make a story with less than two characters? In an animated short, every character is built from nothing by combining shapes, tweaking every vertex and then rigging all of these pieces to a skeleton and controls. As you can imagine, this takes a lot of time and usually a lot of people.

If there is a way to have an interesting conflict with only one character, it is certainly worth considering. I can think of two ways this can happen: the character has an internal conflict between warring sides of himself, or the second character is just not an actual character, but nonetheless presents a conflict. For example the second character could be a natural phenomenon: a mountain to be climbed, or a wind to be survived.

My story idea is about a tree that comes to life. However, soon after awaking excitedly to consciousness, the tree realizes that he can’t move around because he is cemented to the ground by his roots. The tree’s predicament becomes even more aggravating when a ball rolls over from a nearby playground and he can’t quite reach it. The conflict is between a tree and its own nature, and he must get to the root of the problem. 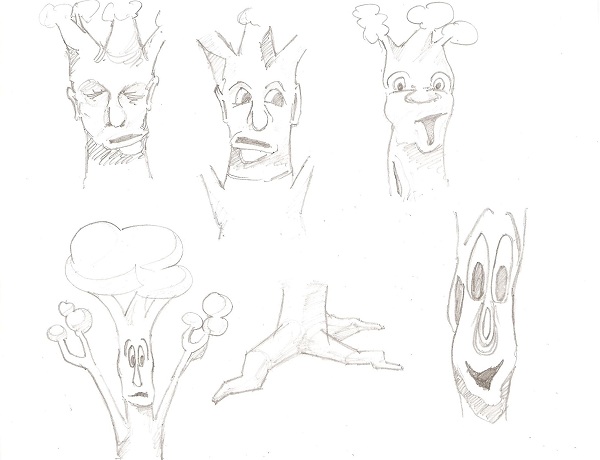