Downtown Los Angeles would not be the same without its murals. With a recent lift on the ban of street art, the protection of murals is now more important than ever.  Many tell a history of people from Los Angeles over time. Since there are so many, I thought I would post one of my favorite murals from downtown. This mural can be found on Main and 5th Street. I first stumbled upon this mural while on my way to dinner and was taken back by the image. For the longest time, I have been trying to figure out what this mural means. This is one of the many elements that are intriguing about murals, trying to figure out the message behind the image. Some messages might be apparent, others are to be interpreted by each viewer individually. This mural was made by Claudio Ethos, an international muralist from Brazil. A great deal of his work resembles that of surrealist artists, however, he does not identify with that kind of work. Most images he makes are generated from dreams and nightmares he experiences over time. Although these images represent his unconscious thoughts, he leaves it to the viewer to make their own meaning and interpretation from it. This mural for me represents artists that strive to create work that forms a life of its own, taking a little piece of the artist with it. The reason I like this mural so much is because the meaning represents a big number of murals in Los Angeles that commemorate the lives of those who formed the city into what it is today as well as leaving behind marks of the artists from the past and present alike. 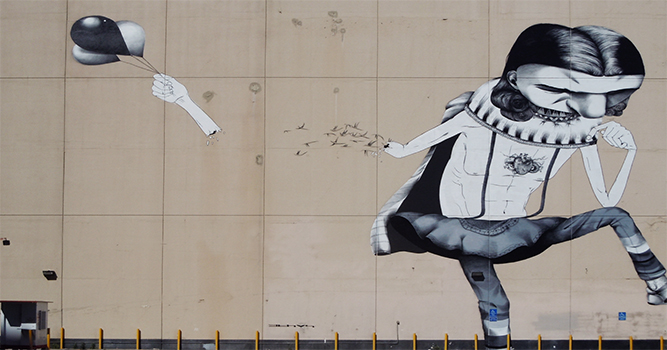