Painter from Los Angeles to look into: Kehinde Wiley. Kehinde Wiley is a painter who is most known for his portraits of African American men from Harlem and South Central. His portraits are exciting to look at since these men are painted in traditional poses from masters paintings. He would go on the streets of South Central and invite men to his studio to pose for his portraits. Once they got to the studio, Wiley would give them books with paintings from the masters to choose a pose from.  Wiley’s work combines art from the past and contemporary together to make something visually interesting. The poses that these men take explore themes of masculinity and power through representation. In addition, his different use of patterns communicates ties to different cultures around the world. Although some paintings closely resemble the original, the context of the person in it gives each piece a completely different meaning. A reason for why these portraits are so compelling is because it reevaluates something that has already been done and is twisted into something new.

Wiley currently has work at LACMA in the show Futbol: The Beautiful Game until July 20,2014. The show explores the game of soccer and its influence on cultures 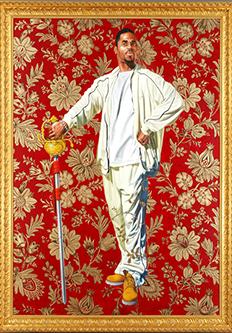