The Flavors of Change in Tepoztlan By Sarah Sophia Yanni

Spanish for “full stomach, happy heart”, the words of my family still echo. On over a dozen occasions during my childhood, we ventured from our Los Angeles home across the border to Mexico. With a shy but eager smile on my face, I always asked for seconds. Traveling to Mexico for the first time in several years, I knew dining might be a challenging situation; unlike my childhood years, I am now vegan. This particular trip took me to Tepoztlan, a beautiful mountainous place just an hour and a half from Mexico City. It was up to this town to keep this Spanish saying alive, even for a vegan like myself.

The place to start would be the Mercado, or outdoor market, that assembles in the heart of town seven days a week.

“Comida Pre Hispanica” reads a sign above a small stand in the center of the Mercado. Every seat is filled with local Tepoztecos dining on colorful patios: green with kale, red with beets, and toasted brown with a sporadic sprinkling of seeds. Rosie takes orders as quickly as she can, noting that the food is “completamente vegano.” A surprising fact since there was no sign boasting of veganism, something found in most plant based eateries. At Rosie’s, it was implied. “Mira,” Rosie opens up bags of chia seeds in their white, brown, and black varieties to show us. Before Cortez conquered the Aztecs in the 16th century, “solo colectaban.” They only gathered – they didn’t hunt. There was no notion of killing and using animals for nutrition. The Pre-Hispanics relied on grains and raw, natural food from the Earth as sustenance for centuries long before Whole Foods came on the scene.

One block away from the center of the Mercado is Yazmin, an artisan bread maker. Her large basket contains a multitude of moist loafs of banana, fig, coconut, and tomato, to name a few. A bohemian Tepozteca, Yazmin has been baking and selling in her hometown for over 20 years. She wears long feather earrings and colorful skirts, and as she offers out samples, her underarm hairs peek out from her tank-top. Her breads are also vegan, and she uses her family recipe, passed down through generations of Tepoztecos. She explains that when her grandfather was 20, he had an accident that severely impacted his health. That’s when he decided to really think about the food he put in his body, and he created  an animal friendly bread  recipe that has been  perfected over time – or at  least it tastes like it has  been. Like the generations  before her, Yazmin is vegan  as well, except that she eats  honey, a fact she confessed  to me with a laugh, claiming  that it was simply too  delicious to give up.

Yazmin initially exudes a warm and welcoming energy, but her tone soon shifts: she shares how a decade of significant change in Tepoztlan has impacted her business. What was once exclusively a town of indigenous families and deep-rooted traditions has become a hybrid place. These traditions still exist, but they now cohabitate with the changes brought on by tourism. Notably, tourists who are fans of yoga, healing, mystical energies, and many who are part of the religious group, the Hare Krishnas. Before this influx, Yazmin had a central location in the Mercado. Now, a Hare Krishna man who sells dream catchers and jewels runs her old post, while Yazmin is on the side by an alleyway. One of her biggest frustrations is that previously, she could buy an ingredient called algarroba for 60 pesos per kilo. Now it is at least 100 pesos per kilo. “Pero lo necesito!” she explains, as algarroba is an integral part of her recipes and she cannot bake without it. Yazmin also notes that obtaining permits is a lengthy process, and that although she has been selling on this particular corner for almost 10 years, she still hasn’t been approved for a vending permit. She speaks bitterly about tourists and I try my hardest to conceal my California Spanish accent as to not be grouped with these villains in her mind. The economy is theirs now, she says, and not of the Tepoztecos.

Two blocks in the opposite direction from the Mercado are two successful vegetarian eateries, a restaurant called Govinda Ram and a bakery called Om Sweet Om. The Hare Krishna influence is evident. There are shelves of books selling the Bhagavad Gita, their sacred text, and books about their practices, vegetarian diet, and meditative lifestyle. Both places have background music playing that sounds vaguely South Asian. The sounds, paired with the inescapable scent of incense hovering above the food create an enticing experience when entering. As far as I can see, there’s nothing villainous about them at all. Govinda Ram and Om Sweet Om cater to a customer base that is almost entirely touristic, and both are relatively new – Om Sweet Om just opened in 2011. Here tourists pay for meals that are more expensive than the Mercado, but tourism is not an evil thing according to the three women working at Govinda Ram. Tourism means that people are coming to Tepoztlan and seeing it’s beauty. It doesn’t matter where they choose to eat lunch. Tourism is a natural part of the changing times,  helps the town gain profit and visibility. And for both tourists and locals, failing to notice either of these eateries is quite difficult, since they have prime spots on Avenida Cinco De Mayo. Their vegan and vegetarian fare is advertised via large, ornate signs hung on the crumbling brick walls of the structure. Govinda Ram even offers body piercings in the back of the restaurant and one of the employees tells me that having it done there will give me good karma. I say “no thanks”, and order a tofu burger instead.

This kind of a clashing of cultures reminds me of shifts occurring close to my own home. Over the past decade, traditionally Latino Los Angeles neighborhoods like Highland Park, Echo Park, and Silverlake have been transformed into trendy and desirable locations for successful artistic and literary types. Streets once peppered with taco stands and fresh Latin American fare, now boast a wealth of upscale coffee shops, organic creameries, and vegan cafes. However, while the winds of change can be new and innovative, finding harmony with the rich tradition that already exist in any given place is crucial. Since this new generation is comprised of a great amount of yoga enthusiasts, this concept should be familiar to them: it’s all about balance.

The unique city of Tepoztlan is definitely on its way to meshing these traditions. In no other town have I walked down one block and found both an elderly Mexican woman selling vegan tamales and a young white man offering “hamburgesas vegetarianas” out of a tan woven basket. These culinary experiences are only enhanced by the backdrop of the mountains that tower above the town. From the Mercado, Govinda Ram, and Om Sweet Om, these beautiful cliffs are visible. Perhaps the food serves as an offering to a greater power, whether it be Krishna or the mountains themselves. Whatever it may be, Tepoztlan had a multitude of options for my vegan palette and I came away from this place with both a full stomach and a full heart. 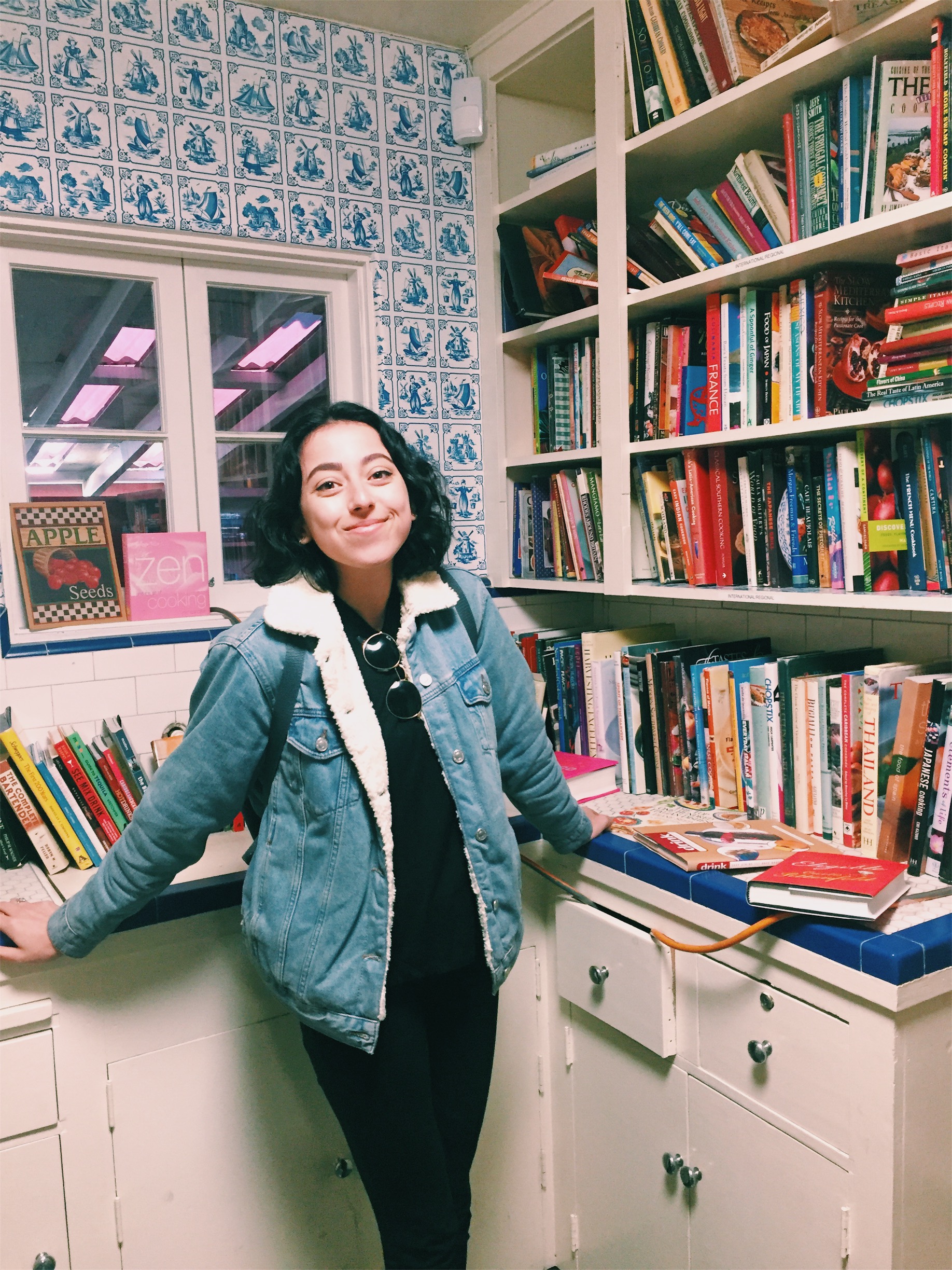 Sarah Sophia Yanni is a senior at USC majoring in Narrative Studies. She is currently working on her Capstone, which is a collection of personal essays centered on family, education, and growing up in a Spanish-speaking home. She lives online at sarahsophiayanni.com