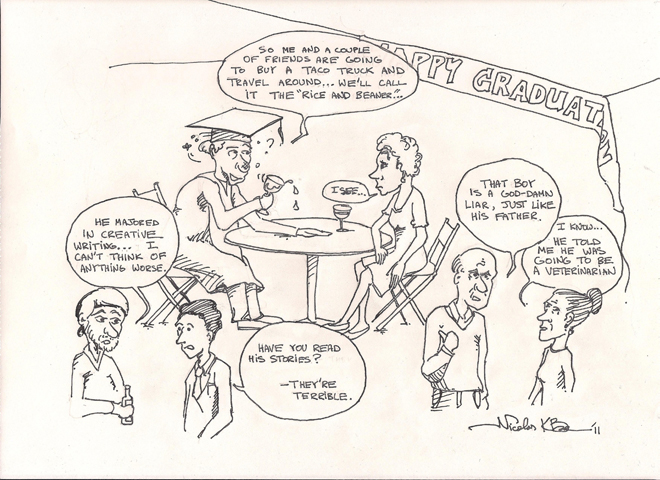 It’s that magical time again. Suck it all in. In two months a pretty stage will be prepared. PA systems will rise out of the earth like monstrous rectangular lollipops. A blanket of folding chairs will have been laid out just for you, and the grass—dark green and freshly cut—will be outlined by clean hedges, flecked with the entire color wheel of flowerbeds.  It’s time to celebrate the death of the student. It’s your funeral, so have fun.

Commencement speeches, the future, positivity—It’s a beginning not an end—so collect your diploma and take a cup or six of lambrusco.

Being one of the youngest in a big family, I’ve endured more than a few college graduations. It’s important not to take this day too seriously. You have no idea what you’re going to do with the rest of your life and everyone at the family party knows it too. So why worry? It’s like being naked in a dream: it’s only embarrassing until you decide you can walk through walls, too.

Be creative with it. Give the relatives a nice handful of fascinating bullshit. Nobody wants to hear about a non-paid internship in the fall. The response: I don’t know, Aunt Ethel. It’s tough. The economy isn’t good right now might as well be replaced by bark noises or the slow and rhythmic recitation of a poem you like. Anyway, the economy could be thriving and your broke-ass Humanities degree still wouldn’t go for much. It’s important to remember that the majority of party goers you’re talking to are older relatives who, for one reason or another, by way of age or experience or resentment of youth, will never take you seriously.  Despite your pretty GPA and good firm handshake, for any fifty- or sixty-something adult, it’s hard getting over that chubby baby making messes in its pants during Christmas ‘91.

Always remember, this is blind celebration. Kind of like walking out of a four year movie. Maybe you liked some of the actors. Maybe you slept through a little of the boring part. Or maybe you’re just a total asshole now. Either way, you’ve sat through it, chewed all the popcorn you could, and finally busted through the double doors to the parking lot, wiping your hands on your shirt, flash banged by the white sun, and thinking, Where did I park?

So when asked about future plans, consider it the perfect time to talk about the screenplay you’re writing, and with detail. Give major plot points, character shifts. When you feel the time is ripe, lean into them and whisper the twist ending.

He’s a robot. A goddamn robot, Uncle Tony. Been one all along.

Or go nutty with business schemes—talk about inventions you’ve brewed up, amenities you think there’s a hidden market for. Talk about all the coffee blends you’ve created and now want to try out at your new shop, Bean Scene.  Just whatever you do—don’t hang around the same relative too long. Get in, get out. Don’t linger. Drink plenty of whatever’s going around. And don’t tell anyone the same story twice. Consider it a testament to the fact that you’re twenty-two and untouchably young, in the prime of your life, and who the hell cares if you don’t know what you want to do with your life—you can modify interests like Halloween costumes, or drop the whole suit completely and run naked with a red solo cup in your hand. Don’t waste your time doing something you think is good in the long run. If someone says: C’mon. No really…Say back: I’ve been thinking about this a long time, Aunt Gloria. And this is it. I’ve put it all into this one idea. I can’t back down now. Why should I? It’s the only thing I’ve got going for me.

The week before graduation, the grounds crew dropped shit all over the grass. That’s why it’s so green.

Considering I’m an English major staring down the barrel of this kind of horror in about a year and two months—I’ll wrap this one up with a poem I like, by a writer who I ripped off the title of this blog from.

The people who were better than us were comfortable

They lived in painted houses with flush toilets.

Drove cars whose year and make were recognizable.

The ones worse off were sorry and didn’t work.

Their strange cars sat on blocks in dusty yards.

The years go by and everything and everyone

gets replaced. But this much is still true—

I never liked work. My goal was always

to be shiftless. I saw the merit in that.

I liked the idea of sitting in a chair

in front of your house for hours, doing nothing

but wearing a hat and drinking cola.

What’s wrong with that?

Drawing on a cigarette from time to time.

Spitting. Making things out of wood with a knife.

Where’s the harm there? Now and then calling

the dogs to hunt rabbits. Try it sometime.

Once in a while hailing a fat, blond kid like me

Not, “What are you going to be when you grow up?”