Film and television not only reflect society, but also act as a catalyst to how we view and react to a variety of circumstances in our own lives. Both artistic mediums offer different perspectives of the world. Narrative television and film involve fictional characters meant to portray actual life, or at least an interpretation of it. Yet when analyzing well-developed characters there seems to be wide-spread criticism on how females are portrayed in media. In analyzing female characters and comparing them to male characters, gender problems in media seems to parallel the gender problems we face in society. So I started over-analyzing female characters in every movie or television show I watched until I came across this image on tumblr one day: 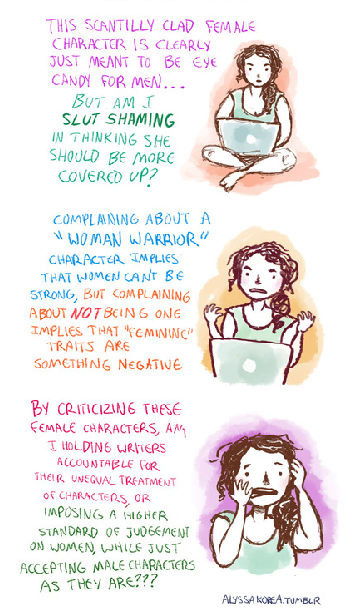 This post entitled “Feminist Media Criticism Problems” exemplifies the merry-go-round my brain goes on when analyzing female portrayal in media. I ask myself the same questions of whether or not I am over-analyzing female characters because society tells me there is a problem and therefore film and television must be one of the causes. After seeing this post and reflecting on how I was viewing stories with female characters, I realized that I needed to go about a different way in my analysis.

And that is where the problem is.

One of the “tests” for female characters in a film is to see if two female characters can have a conversation for an entire scene without talking about a guy. This never exists in romantic comedies and seldom exists in other genres, even with a female protagonist. If you do the test with males, almost all of them pass (aside from romantic comedies). This is because in most cases, the majority of a cast will be male with one or two females thrown in the mix. There are of course exceptions to this, but the fact that those films and shows are labeled as exceptions just adds to the problem.

We are left with having to analyze female characters more so than male characters because there are less of them, and therefore have less room for diversity and more room for criticism. This meticulous analysis exists because film and television matter in the current issues with gender equality and representation. Analyzing females in comparison with one another in addition to males is important and helpful, but seeing how these characters break out of archetypes and clichès is where the diversity and well-developed female characters will expand.