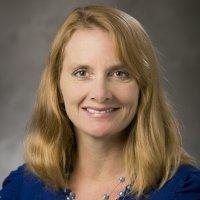 “After spending so much time as a pilot, I found it incredibly frustrating to work with technology that didn’t work with me.”

Missy Cummings is currently an associate professor in the Duke University Department of Mechanical Engineering and Materials Science. She graduated from the U.S. Naval Academy in 1988 and received her master’s degree in space systems engineering from the Naval Postgraduate School in 1994.

When the “Combat Exclusion Law” was repealed in 1993 women were allowed to become fighter pilots for the first time in U.S. history. Cummings was put on the short list to be in the first few group of women because of her demonstrated experience. Cummings was chosen to fly the F/A-18 Hornet, a technically advanced fighter jet. Her military experience led to a desire to combine humans and computers. Her work focuses on how they integrate together in technical systems. She currently works on this research as the director of the MIT Humans and Automation Laboratory (HAL) and holds appointments in the MIT Aeronautics and Astronautics department, the MIT Engineering Systems Division, and the Computer Science and Artificial Intelligence Laboratory. Her research focuses on how design principles influence humans when they control complex systems. Cummings says, “In order to build a $1 billion air traffic control system, you can’t just do it by rule-of-thumb, you need to use models that take into account human factors, such as that people get bored by advanced automation systems”. Other than boredom, she studies the strategies that people use to perform tasks. It is inspiring to see how Cummings took what she learned from her military career and applied it to her own research in order to make a change in the world. She saw a problem that needed to be solved within her field and she didn’t wait for someone else to solve it, instead she went out and began to solve it herself.