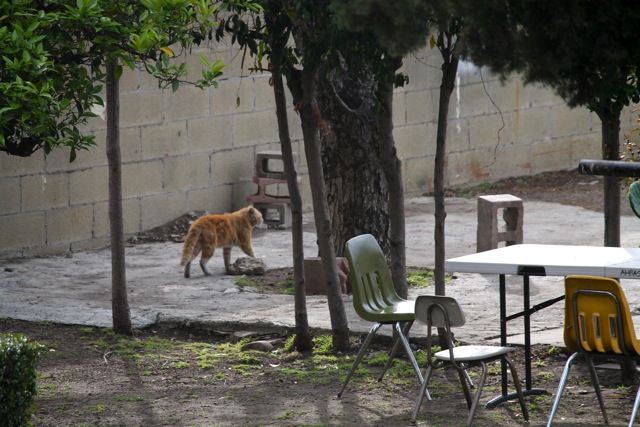 Sometimes, living in by downtown Los Angeles feels more like living by a pound.  Every evening, without fail, my apartment mates and I are treated to the lovely sounds of cats crying outside our windows. It seems that there’s an alarming number of cats in this city, both domesticated and stray cats adventuring outdoors. This makes me both sad and happy, sad that there are so many homeless kitties, but happy that so many people around are nice enough to care for them. One of my friends, for example, has unofficially adopted two cats who have basically moved into her backyard.

Coming from a home with four dogs and a cat, I’m not used to things being quiet when it comes to having animals around. The seemingly ever-present meowing from next door seems more real than spending hours watching cute animal videos on YouTube – yes, that’s happened before, and no, I’m not ashamed.  Sadly, my roommate despises cats. Really, truly, and passionately detests them, in fact. Apparently, she had a traumatic incident with a cat sitting on top of a fridge when she was younger, and now she operates on a belief that cats are “poisonous.” Thus, as long as I continue to live with her, I will never be able to bring my beloved Ginger with me to L.A., or adopt a new kitten. And let’s face it, dogs are too high-maintenance for a college student living in a tiny apartment. Choosing between my cat and my roommate is a tough call, but, hey, cats don’t pay rent. And I love my roommate enough to forgive her feline hatred….well, maybe.

Besides the screeching, the cat gang living next door is quite loveable. I’ve counted at least four who seem to permanently reside there, but it appears that several other cats come and go every now and again. I usually observe them lounging on the house’s porch steps or sleeping in the garden out front; sometimes, they even leap over the wall to my complex’s car park and sunbathe on top of the cars.

Anyways, until my roommate amends her irrational animal beliefs – she also thinks squirrels are evil – I must settle for just being neighbors with cats. At least here in L.A. it seems that the creatures are unavoidable.