In Sylvia Plath’s The Colossus and Other Poems, one of the most prevalent motifs is

the speaker’s feeling of confinement or suffocation. The majority of poems in this collection

depict the speaker resigning and accepting their state of imprisonment. Many scholars,

such as Maher A. Mahdi, find that Plath’s poetry reflects “a suppressed state that inspires

a fervent desire for freedom” (Mahdi 95). However, as both a contradictory person and

poet, Plath’s poetry contains many contradictions, including a tension between notions of

entrapment and liberation. Many of the Colossus poems involve the speaker being held

captive by some person or force, and in some the captivity is desired or even self-imposed.

In a few rare and outstanding exceptions, such as “Mushrooms,” the speaker(s) instead

struggles to break free from imprisonment and experience freedom. As Jacqueline Rose

writes in “The Haunting of Sylvia Plath,” “Plath is not consistent… She writes at the point

(10). This tension between conflicting desires certainly exists within The Colossus as we see

to escape from restraints that have been placed upon her by an external force.

In many of the Colossus poems, the speaker either cannot or does not wish to escape

from her confinements. At the end of the title poem “The Colossus,” the speaker realizes

remainder of her life, for no one is coming to rescue her. She writes, “My hours are

married to shadow. / No longer do I listen for the scrape of a keel / On the blank stones of

the landing” (lines 28-30). Joining her remaining hours to the imagery of a shadow evokes

a sense of doom, or fading out of light and consciousness, which is then echoed by her

complete resignation and loss of hope over ever having a means of escape. Here the speaker

seemingly has no way to break out of her imprisoned state, whereas in “Spinster” the

speaker willingly confines herself. In this poem she feels “afflicted” (line 7) by the “rank

wilderness” (line 10) of spring and by the unruliness and unpredictability of men, and so

“She withdrew neatly” (line 24). Instead of confronting the chaos of the world, she decides

to imprison herself so she cannot get out and the outside world cannot get in. In the final

stanza of the poem, Plath writes, “And round her house she set / Such a barricade of barb

With curse, fist, threat / Or love, either” (lines 25-30). The speaker sets up these barricades

to protect herself against forces outside of her control. Even though her self-imposed

nature, she has also shielded herself from positive forces such as love. Thus the speaker’s

conflicting attitudes toward confinement and liberation become even more complicated by

Although “Mushrooms” is also rife with tension, like much of Plath’s work, the

poem is an anomaly in the Colossus collection. “Mushrooms” first establishes itself as an

outlier because it takes the point of view of multiple speakers. The mushrooms come to

the speakers appear to be women. The mushrooms move “discreetly” and “quietly” (lines

the time Plath was writing, women were expected to be quiet and submissive and were not

supposed to hear, see, or speak anything of import. Women were expected to “Diet on

were available after the men had taken their fill. Plath “recognized the social constructs of

(Mahdi 95), and this is clearly depicted through these lines in “Mushrooms.” The

mushrooms ultimately proclaim to be “meek” in line 26 which correlates with lines 31-32:

“We shall by morning / Inherit the earth.” This alludes to the Biblical passage Matthew

5:5, which states, “Blessed are the meek, for they shall inherit the earth.” Traditionally

women were considered the “meeker” sex, supporting the notion that the mushrooms

represent women. Although “Mushrooms” contains a great deal of imagery depicting the

meek and gentle nature of women, the mushrooms’ intent to “inherit the earth” hints that

the mushrooms, or women, are not content with their subservient position.

Colossus, “Mushrooms” further presents itself as an anomaly in that the speakers actually

break free from their restraints. The mushrooms, appearing to symbolize women, seem

break through the earth to “Acquire the air” (line 6). Then their “Soft fists insist on /

needles or pavement in order to surface, but they are capable of doing so because they are

to break out of the confinement of the earth and acquire their freedom. This need to

and anger towards the clearly defined gender roles prevalent in the 1960s” (Mahdi 96). The

mushrooms describe themselves as being “shelves” (line 25) and “Tables” (line 26), placing

are trying to break out of are gender roles, which confine women to their homes where they

must serve their husbands and remain unseen and unheard by the world.

gentle and meek nature of the mushrooms and their desire to revolt. As a result, their act of

breaking free from oppression is very peaceful, quiet, and subtle rather than aggressive or

violent. When the mushrooms break through the earth, they emerge “discreetly, / Very

use their fists to punch through their restraints, but these fists are “Soft” (line 10). The

mushrooms are not overly pushy; rather, “The small grains make room” (line 9) for them

to gently “Widen the crannies, / Shoulder through holes” (lines 17-18). Their emergence

from an oppressed state is not a loud and angry event – it is a subtle, silent, and gradual

process. Grace Schulman describes the mushrooms as “a force that is energetic and

winning, but frightening and aggressive” (172), but this characterization does not seem

accurate. The mushrooms’ revolt is gentle, not “aggressive.” Furthermore, they are

“Nudgers and shovers” (line 28) who work gradually, so their force could be better

characterized as patient and determined than “energetic.” Describing the mushrooms as

“winning” and “frightening” does not seem totally inaccurate, but it is perhaps too early in

the lives of the mushrooms to describe them as such, assuming their movement perpetuates

beyond this poem. The mushrooms may one day become a frightening force winning their

battle, but for now it seems unlikely that others have even taken notice of them at all since

they move quietly, subtly, and in the dark. By the end of the poem, the mushrooms have

only barely begun their movement, as they say, “Our foot’s in the door” (line 33). These

While the contradiction of the mushrooms’ nature and desire certainly creates

tension, the main source of unease in “Mushrooms” lies not within the poem itself, but in

what the poem foretells for the future. The meek mushrooms are mounting a peaceful and

subtle revolt, and yet their intention to “Inherit the earth” (line 32) hints at an underlying

collection. The notion of the mushrooms presenting a growing threat is further emphasized

by the sound and rhythm of the poem. Plath’s use of an “immediate diction” including

syllables” (Schulman 171) causes the poem to sound like a quiet chant or incantation. This

exclamatory remarks emphasizing how many mushrooms are breaking free and preparing

to inherit the earth increases the threat they will one day present. Not only do the

mushrooms intend to break free from their imprisoned state, they intend to overturn

current systems and, eventually, take over the world. While Plath was determined “to move

beyond the expected lifestyle” for women, Mahdi notes that “a retaliatory effect becomes

apparent in many of her poems, which depict a world in which the female is superior to the

male, where the tension between a subjugated female position and her attempts to free

herself from such constraints is evident” (Mahdi 95). The desire to escape from one’s

restraints is already unusual within The Colossus, and the intention to go beyond escape

and invert the current, traditional structures further heightens the tension and uneasiness

In the final poem of the Colossus collection, “The Stones,” the speaker emerges from

her confinement in the hospital, but unlike “Mushrooms” in which this freedom was

evidently desired, the speaker’s attitude towards being freed from her restraints remains

ambiguous. The speaker is confined for much of the poem, as she has “entered / The

stomach of indifference, the wordless cupboard” (lines 5-6) and describes how “The food

34). Words such as “cupboard,” “embrace,” and “swaddled” evoke imagery of the

speaker’s enclosure. It seems as though she is being fixed or reshaped into a new and

improved being, since she lies “on a great anvil” in “the city where men are mended” (lines

the light” (line 22), which suggests that she is currently in confinement (most likely within a

hospital) for the purpose of being mended, but will soon be released back into the world

and regain her life and freedom. However, the speaker does not seem to desire this

freedom. In the last stanza she says, “My mendings itch. There is nothing to do. / I shall be

good as new” (lines 44-45). Some critics read this last line as hopeful, believing that “‘The

promise” to embrace her passion for life (Schulman 176-7). I am not in full agreement with

Schulman’s belief, as I find the conclusion of “The Stones” to represent the tension

characteristic in Plath’s poems rather than an optimistic look toward the future. The

speaker does seem to be looking away from darkness and toward the light of her future,

but not without some fear and uncertainty. She finds her “mendings” and the new form she

is taking to be quite uncomfortable, but unfortunately there is “nothing to do” to relieve

this discomfort. Plath thus generates extreme tension in “The Stones” between the

for the comfort of the darkness.

Each poem within The Colossus certainly contains its own conflicts and dilemmas,

and desires only heightens the uneasy tension that perpetuates beyond the pages. For much

of The Colossus we see a speaker who is comfortable with her confines, or who has at least

resigned and accepted her restraints. While the ambiguity of the ending of the “The

reservations, the speaker is at least preparing to face the world), I still find “Mushrooms”

to be the strongest source of lingering tension. As discussed previously, Grace Schulman

believes that the mushrooms are “frightening,” but their intention to invisibly gain power

will be frightening. What makes the mushrooms such an unnerving force is that they are

and will continue to be sweet, docile, and unthreatening – until it is too late. Mahdi

her early poems, which “presages the vengeful uprising of ‘Lady Lazarus’ and ‘Daddy’

[from Ariel] while maintaining the innocent, expressionless appearance of paper, stone,

mannequin, or doll” (Mahdi 98). Just as paper, stone, or mannequin exhibits a white

(line 2). In this poem, they appear innocent in their white meekness, and yet they

foreshadow the “vengeful uprising” that will occur when they inherit the earth.

seems ahead of its time, as if it is truly presaging Plath’s future Ariel poems which feature

“an explosively liberated poetic voice” (Parker 53). “Mushrooms” is a veiled threat – a

prediction of the hostility, defiance, and liberation to come, almost lost under its disguise of

meek, innocent mushrooms – and this is precisely what creates so much tension and unease

in both the poem and in the Colossus collection as a whole. 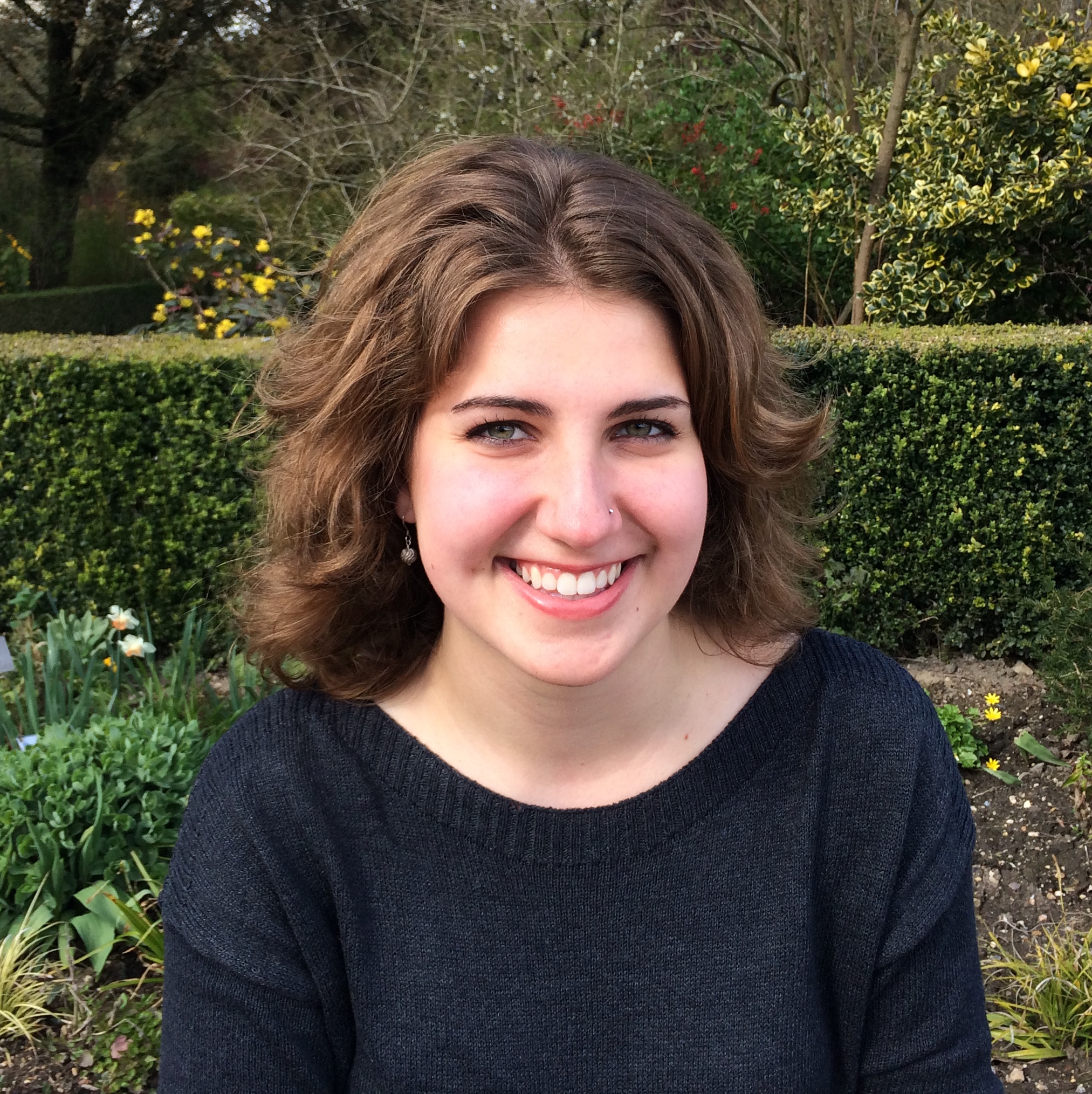 Paige Wyant graduated from the University of Southern California in 2017 with a B.A. in English literature and a minor in Culture, Media and Entertainment. She currently works as an associate editor for The Mighty, a digital health community created to empower and connect people facing health conditions and disabilities. Paige is passionate about helping others share their stories and using writing as an instrument to spark both personal and social change.

Mahdi, Maher A. “From a Victim of the Feminine Mystique to a Heroine of Feminist