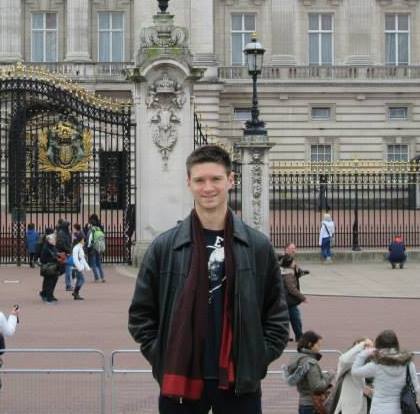 Bryan Oliver will graduate with honors from USC in 2015 with a degree in Classics and a minor in Russian. He has a passion for foreign cultures and languages, both ancient and modern, and has studied at four universities in three countries. Upon graduation, he will be conducting research in England, and then moving abroad to continue working and studying. He hopes to continue writing about the amazing experiences and people he has encountered across the world.

The House of the Rising Sun: Folklore across the Ages

From posters for the latest Disney movie to video games based on Homer’s Epics, it is hard to pass a day without noticing the influence of folklore on modern society. The stories of our past are perpetually being remade and retold across all genres. In many modern adaptations, revisions and anachronisms leave only the skeleton of an original piece of folklore, but it is precisely those remnants which ensure its popularity. As the most inter-cultural artistic medium, Music is the easiest genre in which to observe these metamorphoses. Transcending time and place, music readily lends itself to the most varied of interpretations, and can be infinitely remade into something new. However, while both authored music as well as folk songs share this propensity for adaption, few of the former have been remade, covered and re-released with the variety and consistency of folk music, and among folk music, few songs have been as enduring as The House of the Rising Sun. In fact, the enormous success of this song can be traced directly to its genesis as a work of common people.

Controversy remains over whether The House of the Rising Sun “dates back to 1600s England [or…] the American Civil War,” but we have two clues within the song which imply peasant made origins (BBC). The first is that its lyrics deal with prostitution, and the second is that “the original melody resembles an arrangement of ‘Matty Groves’, a traditional English ballad” (H2G2). The combination of such a vulgar theme with an already well-known folk melody strongly suggests humble and communal roots, but beyond this, there is also concrete evidence that The House of the Rising Sun was considered to be a folk song by the folk themselves. Its first recorded discovery was in 1937 by “Alan Lomax, an American folklorist, [who] was travelling the United States to record and preserve American traditional folk music” (H2G2). He recorded sixteen year old Georgia Turner singing it in Middlesboro Kentucky, and called it “The Rising Sun Blues” (BBC). Lomax had specifically been seeking “recordings of popular folk songs sung by ordinary people in their natural environments,” and found this song an ideal match, nestled deep in the rural Appalachian Mountains (BBC).

But whether English or American, The House of the Rising Sun surely arose from the community as a whole, to which it owes its success. Hungarian composer Bela Bartok puts forth the theory that “in folk music there exists a propensity to the common people” and that the way for a composer to succeed is to base their work off of folk music (Ota 36).  He speaks of the “real spirit present in the music of any particular people,” suggesting that folk music endures because, having risen from the masses, it represents the essence and spirit of a group and celebrates their shared beliefs. Thus folk music appeals to all people who share or identify with those beliefs throughout time (Ota 34). On the other hand, although an authored piece of music may be an incredible and enduring work, it is still the work of an individual voicing their particular conditions and social background. Folk music is driven by the common bonds between people, and when successful, “the influence of peasant music on art should involve the entire process of creative activity” (Ota 35). By immersing oneself in the culture of the common people  and sharing in their beliefs and customs, one discovers truly universal human elements rather than those particular to a specific class or individual; “thus a composer may acquire the spirit (in Hungarian szellem) of folk music” (Ota 34).

Surely there is something in the chords and harmonies of the minor-toned and chant-like House of the Rising Sun which represents the szellem of the people, but its folk qualities are more easily seen in its lyrics, which, after nearly a hundred covers, have remained largely the same as those recorded by Alan Lomax in 1937. In a study of non-written folklore, Dr. Megan Biesele argues that non-written tradition follows a tripartite timeline of “Concern with Origins… functionalism… [and] description,” and that “non-written expressive forms, and only these, may systematically do these three indispensable things for oral cultures” (Biesele 54-55). In The House of the Rising Sun, the lyrics evidence each of these qualities: they are concerned with describing the society and circumstances which created it (origins,) provide advice and warning to said society (functionalism,) and reveal what life is like for people in that society (description).

The “origins” of the society which gave birth to this song are evident in the first line: “there is a house in New Orleans” (Burdon). This sets the stage and then the second stanza proceeds to give information about the people in that society: “My mother was a tailor/ She sewed my new blue jeans/ My father was a gambling man/ Way down in New Orleans.” The song is about a prostitution house in New Orleans. “The House of the Rising Sun was traditionally a euphemism for a bordello in English circles,” and it paints a picture of a society in which a prostitution house could flourish: it portrays the common people gambling, engaging in prostitution, and a social attitude of pinning women in traditional roles (BBC). Historically, these things often accompanied houses of pleasure, and “did establishments such as these exist at that time in New Orleans? Without a doubt” (H2G2).

Even more evident in the lyrics is the second theme of folk music, functionalism, in the form of a warning. As Biesele notes, “when personal growth coincides with an ongoing social tradition, the result… [is] longevity” (56). What The House of the Rising Sun admonishes the listener to do, is to achieve personal growth by not adhering to a social tradition, in this case prostitution. Immediately after introducing the “House of the rising sun,” still within the first stanza we are told “it’s been the ruin of many a poor boy/ And God, I know, I’m one” (Burdon). The warnings become more explicit throughout the song with “Mothers tell your children/ not to do what I have done,” and then repeat the first stanza for emphasis. Certainly the song is a strong admonition to avoid this (or any) prostitution house, and by implication, all of the negative social mores dealt with in the song. Since “knowledge may be acquired (by young and old alike) through hearing [a] dramatized story… when the pressure is off,” the song serves as an effective warning (Biesele 56). The relaxed manner of music and its appeal to multiple generations makes it one of the most effective ways to impart moral knowledge.

The third function of folk music, description, is concerned with portraying the identity of its authors. Although there is some overlap between the “origins” and “description” of a society described in music, oftentimes, the very contrast between these two features illustrates how a people have changed over time and are now different. Bartok suggests, for example, that “the notion of Hungarianness was something that one should acquire anew through music,” and this principal holds true for all societies (42). One of the reasons traditional folk music is so powerful is that it recalls common historical bonds, and helps to create a new social identity by recognizing these common roots. This explains something of why The House of the Rising Sun is still so popular: it brings back traditional memories and ties to the American South and New Orleans, just as it recognizes an older social ethic. It reminds us which views we have changed and which ones we still hold, either for better or for worse, and whether through habit or desire. In this way, it is similar to national pride songs such as God Bless America, or Yankee Doodle which both celebrate patriotism now, and recall days in which Americans believed in their country, perhaps more so than today.

The way The House of the Rising Sun speaks for and to to the common people has lead to its enduring success. But its rise to fame is an interesting process in itself. Lomax’s version of the song was “the first to become popular,” and it was this version which was “first commercially recorded in 1934 [by] Clarence Tom Ashely and Gwen Foster” (American Ballad 27). At this point it still carried a traditionally southern sound; however, as Bartok notes, the folk “spirit” in a composer may indeed lead to or even be “necessary for progressive music,” and songs will evolve with the times (36). Although Bartok had a different conception of progressive music than we do today, The House of the Rising Sun has been, and still is, at the forefront of the musical scene. For instance, pop music changed dramatically when The Beatles began writing music in the 1960s, and accordingly, the The House of the Rising Sun was adapted to this new musical style. Not only “was [it] a #1 billboard hit for three weeks in 1964 sung by the British rock group the Animals,” but in fact, The Beatles eventually made an unreleased cover of it themselves (American Ballads 28). Inspired by these new adaptations, Bob Dylan decided to drop the acoustic sound he was at the time famous for, “and took up the electric sound for his next album Bringing it All Back Home – pop music thus changed forever” (BBC). Shortly after this, The House of the Rising Sun was again made a hit in 1969 by Frijd Pink, at exactly the same time what we call “progressive rock” was emerging; as recently as 2002, it was recorded by the currently performing and largely popular rock band Muse. Even now the song continues to adapt: with the emergence of electronic music, several “dubstep” versions have been made of The House of the Rising Sun. A simple YouTube Search brings up a wealth of versions, including one video playing the song as covered by eighteen different artists, many of whom are currently performing and writing music.

Of course, the style of The House of the Rising Sun has changed dramatically. The recent version by Muse is quite nearly heavy metal. It is performed on electric guitar, and could in no way still be called a southern ballad. However, the lyrics and the melody line have remained almost unchanged. There are many factors which contribute to the success of any given song, but the inordinate popularity of The House of the Rising Sun is quite possibly matchless. This success, due to folklore origins which have given it mass appeal, will continue to uphold and increase its popularity for years to come.