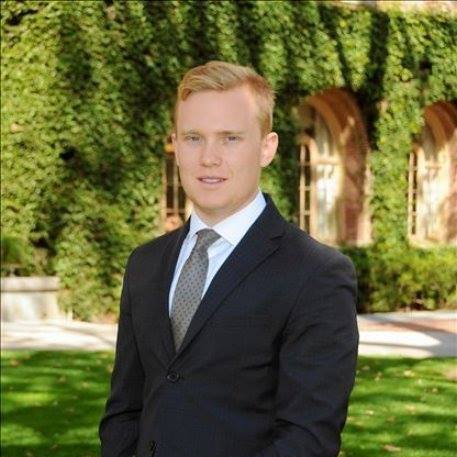 Simon Levine-Gottreich is a junior majoring in biological sciences with a minor in mathematical finance.  He is currently working as a Writing Fellow for Organic Chemistry B, a pilot program bridging the Writing Program and the Department of Chemistry.  While at USC, Simon also worked in biology and chemistry research labs and has worked as a tutor at a homeless shelter in Skid Row through JEP.  After graduating, he plans to either work in biotechnology or pursue graduate study in law. Outside of class, Simon enjoys nature through hiking and backpacking.

In 2012, work was completed on an ultra-low latency fiber optic connection between financial centers in the South Loop of Chicago and NASDAQ exchange servers in New Jersey. After boring through mountains to create the straightest-possible route, private fiber optic cabling now carries transactional information about securities (i.e. stocks, bonds, and commodities) between traders at rates approaching the speed of light. Informational packets can now be sent and their receipt verified at a round-trip time of about eight milliseconds, cutting half of a millisecond off the fastest recorded connection from only a few months prior. While half a millisecond may seem negligible, even a slightly faster connection in trading confers advantage over others and is thus potentially worth billions of dollars.

The fiber optic cable connecting Chicago and New Jersey is only one of many innovations in a long history of ventures aiming to minimize data transmission delay in the finance industry. Some sources report that Napoleon Bonaparte’s unexpected loss at the Battle of Waterloo was supposedly known to Rothschild bankers in London a full 48 hours prior to the British government (Morton, 1962). Trading on this information, the informed bankers made themselves a handsome sum. If true, this is perhaps the first example of the implicit advantage of time in finance. Centuries later on Wall Street, traders are still playing the same game. Several financial institutions now exist (sometimes solely) to profit on the principle of rapid transactional capability. A number of these firms leverage high technology to yield profits using a technique called high frequency trading (HFT), which allows them to execute thousands of orders per second using a computer algorithm.Although not technically illegal, HFT is an ethically questionable practice that preys upon blind spots in the system to make a profit while shifting all of the risk inherent in it onto the shoulders of the American people.

When HFT is utilized, the ownership and availability of assets is not always obvious. Under this system, assets are usually owned for fractions of a second in lieu of traditional longitudinal investing such that overall annual profit could be composed of millions of transactions. The advantages to this kind of trading include being able to act quickly and profit on recently released news, reduce the risk of trading on human emotion, take advantage of price discrepancies among competitors, and process a high volume of information more efficiently than humans are capable of doing. At face value, the results of high frequency trading ensure an institution the best possible price for transactions. It can even be argued that technological asymmetry between those who do not have a fiber optic connection (retail investors, for instance) and financial institutions is inevitable due to relative importance of investment in technology (Hendershott, et al., 2011). Recent events show that profits tend to be conferred to those who possess an edge only a fraction of a second in length. Finance is not foreign to the concept that even a slight original advantage between parties is never truly minimized given time (Gladwell, 2008).

The people who suffer from the repercussions of HFT gone wrong are not the high frequency traders themselves, but ordinary investors and the American public. Large systemic risks are posed when the ability to see an opportunity and act on it is available to some but not all. On May 6th, 2010, algorithmic trading contributed to what has since been known as the “Flash Crash.” At 2:32pm, multiple stock indices began to plunge with some of their largest intraday point losses on record, only to nearly fully rebound within 36 minutes (Lauricella, et al., 2010). Subsequent investigation determined the original cause to be a single large sell order by one mutual fund – nothing much out of the ordinary – followed by extreme magnification of bearish sentiment (bears sell; bulls buy) by algorithmic trading. The entire market fell down a slippery slope once algorithmic activity began to quickly flood the market with sell orders, broadly driving down the price of stocks. Ordinary investors, unable to access light-speed pricing information, could have potentially lost large sums during the swing as a result. For instance, Proctor & Gamble at one point was down 37% from its opening quote. If an average shareholder noticed this precipitous decline and decided to sell on fears of further loss, he may have given up an incredible proportion of his assets based on no real underlying development within Proctor & Gamble. Volatility resulting from the Flash Crash harmed traders unable to act quickly enough. Moreover, due to the investigative resources devoted to the Flash Crash by the Securities and Exchange Commission, taxpayer money and agency attention was diverted from other pressing matters. Through these avenues, the consequences of algorithmic trading are largely borne by the economy at large, rather than those who choose to make the risky choice.

While large market fluctuations may grab headlines, other incarnations of high frequency trading are less noticeable. “Front-Running” is one such practice (Harris, 2002). Usually when a buy order for a security is published on an exchange at a given price, that price is matched with a willing seller. However, prior to a match, an algorithmic high frequency trading platform can spot buy orders and make a marginally higher offer, sometimes at prices fractions of a penny greater. A seller, in his best interest, then sells to the high frequency trader. Now, demand appears higher for that stock due to the multiple buy orders, and a price quote may go up. Thus, when the high frequency trader sells, profit is made. Considering the volume per unit-time of these types of transactions, millions of dollars can be made even if the per-transaction profits are minuscule.

The edge that time provides may be unfair and sometimes goes unseen, but it can also be manifested outside the bounds of the law. In 2013, the U.S. Federal Reserve was set to publicly release plans for investigating certain financial crimes,the news was released in Washington D.C. at 2:00pm. Following a realistic and ideal path, it takes light seven milliseconds to reach Chicago, where massive orders were placed less than two milliseconds after 2:00pm. Barring a change in the laws of physics, it would seem that somebody had access to the news well before the general public (Hunsader, 2013). While Wall Street insiders probably have a better idea than the average person of forthcoming news, laws have long been enacted to prevent transactions based on this asymmetry. The use of actionable intelligence prior to public knowledge is known as insider trading, and is highly illegal under U.S. law. Moral hazard, then, is as widespread in high frequency trading as the systemic risks of a volatility economy.

Recognizing the perils accompanied by HFT, public and private forces are working to equalize market opportunity and weaken the power of algorithmic trading. Government oversight has succeeded in all of the above cases in fining and punishing those responsible for illegal activities—this is, after all, the only reason the events are public knowledge. As for solutions from the private sector, a new alternative stock exchange called IEX went live in October of 2013. A 38-mile fiber coil exists externally on IEX trading servers, in effect adding time to orders and minimizing the risk of outside traders accessing pricing information prematurely. Unfortunately, the IEX exchange facilitates less than two percent of overall securities trading volume–although it is growing–and is closed to the general public. (Lewis, 2014). While efforts like these are beneficial, they are still far from perfect. Fines from the securities and Exchange Commission are only a slap on the wrist compared to the profits associated with using high frequency trading algorithms. In addition to these efforts, increased meticulous oversight of the financial industry and HFT will be essential so that socialized risk can be avoided.