Though I am slightly ashamed, I will admit it: I am a celebrity gossip junkie. To be honest, the situation could be a lot worse; it’s not like I spend hours of my time going page by page through Perez Hilton’s blog or have a subscription to US Weekly or In Touch. However, these extremes that I pride myself for not being guilty of, may be more due to my current status as a broke college student than a lack of interest – I do not have the time to waste on silly celebrity news, nor the money to spend buying glossy magazines detailing the lives of various famous individuals. Conveniently, though, it is not always necessary to live vicariously through celebrity gossip. As a resident of Los Angeles, celebrities are easily found roaming through Beverly Hills or attending awards shows throughout the city. USC, in fact, often attracts celebrities to its campus, as well, through many organized events and random happenings.

Thus begins the tale of how I met Jason Segel. 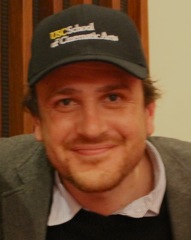 I had heard of Jason Segel’s impending appearance the night before, and, with some brilliant connect-the-dot logic on my part, deduced that he would be speaking in the film symposium class that one of my friends is conveniently enrolled in. Though I tried to sneak into the class so I would be able to watch the film as well, my plans were thwarted by overzealous ID checks. Alas, I thought my dreams of meeting Jason Segel were kaput, that I had missed this one opportunity to meet my favorite actor. And he really is my favorite; I’m not just saying that for the story. I’ve tried to convince my roommate on several occasions of his appeal, whether in How I Met Your Mother or The Muppets, but she has failed to understand the attraction of his adorable demeanor. Anyways, we went to meet our friend after the class to go out, and by a fortunate series of events (or perhaps the over-talkativeness of the guests), class ran twenty minutes long. So my roommate and I swept in as people started to rush out of Norris, meeting up with both our friend and Jason Segel in the front of the theatre.

I managed to contain my excitement and get a picture with him, but looking back, it all just felt so surreal. Really, where else can you randomly run into celebrities but LA? Granted, this wasn’t exactly random, but I’ve had other encounters with famous people before that were entirely unexpected, namely James McAvoy and Ty Burrell. I’m not going to lie, I may be a bit too invested in the lives of celebrities, but this never gets old. I’m always star struck. Living in LA, having the chance to meet my favorite celebs in person, it beats flipping through US Weekly any day.