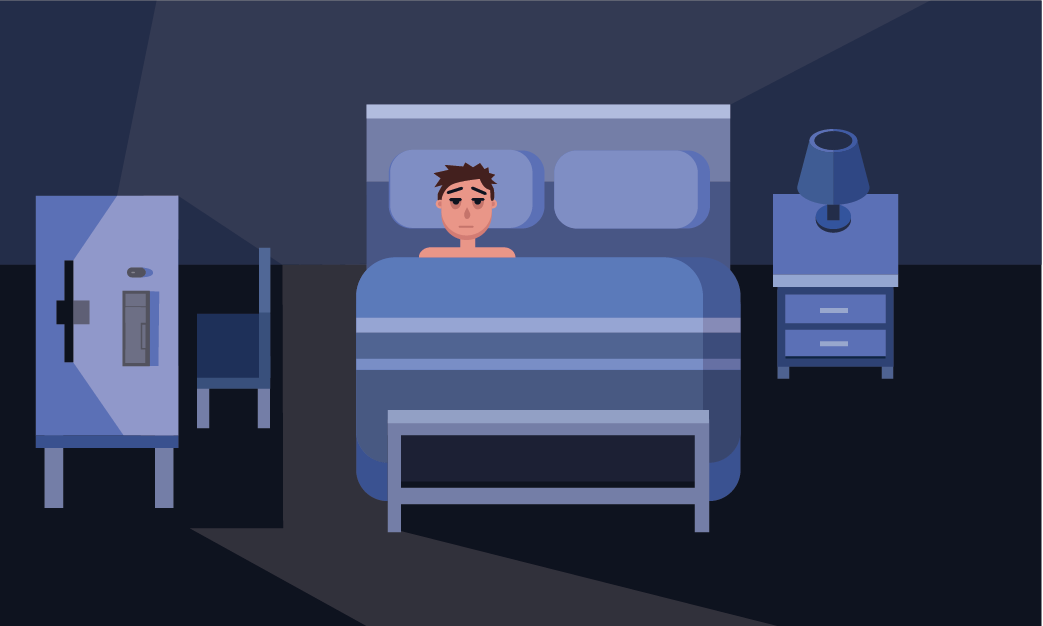 “Americans spent an estimated $41 billion on sleep aids and remedies in 2015, and that’s
expected to grow to $52 billion by 2020,” declared BBC researcher Natana Raj (1).​ ​The success
of this massive sleep industry speaks volumes about the amount of rest that people are getting.
According to a recent report from the Centers for Disease Control and Prevention (CDC), over a
third of American adults get less than the recommended seven hours of sleep each night (1).
Linked to diseases like cancer, diabetes, and depression, sleep deprivation is such a rampant
problem in the nation that the CDC has even labeled it a public health epidemic. Though sales of
sleep-aid products such as medication, earplugs, books, and masks are booming, many people
are still not getting enough proper rest​. ​In particular, there have been popular computer programs
such as Flux that attempt to combat this issue by adjusting a display’s color temperature. Indeed,
scientific studies have shown how the reduction of white-blue light increases the body’s
secretion of melatonin, the sleep hormone. In order to address this national epidemic, the
answers must be paired with large-scale solutions. Although relatively simple and cheap
remedies to sleeplessness, such as night mode on electronic devices, are currently being
employed, they are simply not enough; by applying the concept of optics on a macro scale to
utilize sunlight and light filters in city infrastructure, people can not only combat the severe
health implications of sleep deprivation, but also vastly increase societal productivity through
more alert workers.

Sunlight carries a number of advantages over the range of artificial light, therefore
workplaces and other public buildings should embrace attempts to increase their exposure to

natural light through architectural design. Fluorescent lights have become commonplace fixtures,
being found everywhere from supermarkets to classrooms. However, these interior settings,
especially office spaces, are known for their drab environments; they are usually lit with a sickly
white glow and are often completely isolated from the sun. While fluorescent lights are cheap
and more energy-efficient compared to incandescent bulbs, prolonged exposure to them has been
linked to numerous health issues such as sleep problems, migraines, eye fatigue, obesity, and
even breast cancer (SCENIHR 16-27). These problems arise from how the limited spectrum of
artificial illumination interferes with human body chemistry. The circadian rhythms that regulate
the physiological process of sleep are greatly affected by environmental cues such as light and
temperature (NIH 1). Because of this, the development of 24/7 factories, restaurants, and other
facilities in today’s heavily industrialized society have come with serious repercussions. With
adults having opportunities to stay up later working overtime or unnatural night shifts, the body’s
biological clock is constantly being confused. In a study analyzing the effects of circadian
interference in mice, lead author Ilia Karatsoreos, PhD, of Rockefeller University states that the
results have major implications for humans and “the disruption of our individual circadian
rhythms has become commonplace, from shift work and jet lag to the constant presence of
electric lighting” (1)​. ​Through the widespread remodeling of offices and other building structures
to incorporate more skylights and windows, people who are exposed to fluorescent lights for
extensive periods every day would receive far more sunlight, which prevents disorders such as
insomnia, daytime drowsiness, and poor concentration. Likewise, the installation of solar tubes,
small pipes that use reflective material to bring daylight indoors, in public buildings such as
libraries or schools would help both harness the healthy attributes of the sun and save electricity.
Moreover, the substantial benefits of sunlight are not only limited to sleep; sunlight is essential to

the production of vitamin D, a prohormone that is vital to muscle function and healthy bones
(NIH 1). Known as the “sunshine vitamin,” it helps maintain the immune system and
cardiovascular functions. As a result, building renovations that allow for more daylight exposure
would ultimately bolster public health in the long-run, leading to fewer employee sick days and
less bills paid for doctor visits.

In addition to taking advantage of the sun’s healing properties, society should
simultaneously fight the adverse effects of blue light by utilizing the power of filters. With the
dramatic increase of modern devices that emit blue light, people are finding it difficult to sleep
after checking social media on phones or watching videos on tablets. Furthermore, people who
work late hours at the office must suffer through the bright glare of computer monitors before
bedtime. Studies have shown that blue wavelengths, which are beneficial during the day because
they boost mood and reaction times, are highly disruptive to human sleep patterns. According to
“Blue Light Has a Dark Side,” an article published in the Harvard Health Letter, Harvard
researchers conducted an experiment that demonstrated how “blue light suppressed melatonin for
about twice as long as the green light and shifted circadian rhythms by twice as much (3 hours
vs. 1.5 hours)” (1). ​​In order to combat blue light’s adverse effects on melatonin production,
workplaces should introduce programs that hand out color-tinted eyeglasses during afternoon
and evening hours. These inexpensive tools would have a significant impact on fighting
sleeplessness and digital eye strain, so the mass distribution of these lenses by corporations to
each of their offices would be an excellent investment. Conducted by psychiatrist Colin M.
Shapiro and his team of researchers from University of Toronto, a 2013 study analyzing the
positive effects of blue-blocking glasses found that “filtering short wavelengths may be an
approach to reduce sleep disruption and improve performance in rotating-shift workers” (1). By

helping workers produce higher levels of melatonin, these special goggles allow people who
must labor during the night to still benefit from quality sleep.

This concept of using filters to combat sleep deprivation could be further applied on a
larger scale. By mandating the modification of fluorescent bulb coatings to produce a warmer
color and promoting the installation of light-filtering panel covers in buildings like schools and
factories, cities could establish soothing public environments that lack the harsh glare of
fluorescent lights. However, the issue of artificial light extends far beyond the office, with light
pollution from clustered street lamps and luminous buildings making it difficult for people at
home to sleep. Densely populated urban areas such as Los Angeles are prime offenders. In
addition to modifying lampposts with coatings that reduce the unpleasant glow of artificial light,
cities should apply fluorescent filters to the windows of residential buildings such as apartments.
Initially, it seems that such a drastic, expensive approach to solving sleeplessness is unnecessary,
but if communities start small and build up, they will undoubtedly see the progression of
beneficial outcomes. Many electronic manufacturers such as Apple have already developed a
“night mode” feature that provides a simple solution at the touch of a button, making device
screens emit a redder tint to reduce the harmful effects of blue light. Vlad Savov, a senior
technology reviewer from The Verge, commented in his night mode review that “[his] typically
restless nights have been filled with uninterrupted sleep the likes of which [he] [hasn’t] enjoyed
in a long time” (1). As helpful as these digital programs are, they are attempting to address a
formidable national issue with an individualized scope. These color temperature settings are
often neglected because they are optional and sometimes create an unappealing, dull display.
Furthermore, light pollution would nevertheless impact the sleep health of Americans, regardless
of whether they choose to turn on night mode or not. Thus, an adjustment to lighting on a macro

level would prove to be far more effective since everybody in artificially-illuminated public
areas would benefit from a warmer glow. To address taxpayer concerns about funding, city
governments can first introduce this lighting overhaul on a local scale. If cities that volunteer to
test this comprehensive strategy produce evidence that their citizens are getting better sleep, then
infrastructural renovations based on feedback could be gradually applied across the country.
Ultimately, the benefits of improved health and higher productivity would greatly outweigh the
costs of the program. The sleep deprivation epidemic affects America on a massive scope,
therefore, society needs an equally extensive approach to this problem.

By applying optics to workplaces and city infrastructures, the public would benefit from
not only stronger bodies, but also stronger minds. Environment plays a major role in affecting
one’s psychological condition, and lighting is one of the leading factors that can influence the
amount of work completed and therefore boost societal productivity. In an article that analyzes
the effects of natural light on office workers, Anthea Court, a Master of Clinical Science student
from the University of Adelaide, describes “a series of studies … done on telephone call centre
workers, school students and retail shoppers with findings of increased productivity,
performance and sales correlated with the introduction of daylight” (1). Thus, corporations and
cities have a strong financial incentive to implement smart building designs that incorporate
filters and promote their exposure to natural light. Workplace productivity would rise because of
heightened alertness in employees, and profits would consequently soar because of the increase
in sales. While increasing the quality of sleep that workers are getting, the sun’s rays could also
boost their morale by making the office look more aesthetically pleasing, strengthening a sense
of pride for their workplace. Another notable effect to consider is how renovations in light could
end a frustrating cycle of extensive stimulant usage in today’s culture. Popular among college

students or laboring adults, beverages such as coffee or energy drinks are critical problems that
contribute to the sleeplessness epidemic because they are used to counter daytime fatigue. Large
scale modification of infrastructural lighting would help them get a better night’s rest and
maintain a better mood. As a result, they would no longer have to rely on stimulants to stay
awake and could do their jobs far more efficiently the following day.

It has been estimated that humans spend roughly 80 percent of their lives indoors. With
computers and electric lights being an essential part of everyday life, for both recreational and
business purposes, people disrupt their sleep patterns by taking complete control over both
interior environments and outdoor settings, day and night. The catastrophic national crisis of
sleep deprivation in America calls for drastic measures. It is frightening how accurate popular
media’s stereotype of the typical sleep-deprived college student or exhausted office employee
has become. As technology has dramatically transformed over the last century, humans hold the
power to adapt as a society in response to save minds and bodies from deterioration. Through
deliberate architectural designs that incorporate sunlight exposure and an overhaul in city
infrastructure to reduce the negative impact of artificial light, the sleep, physical health, and
productivity of humans will see massive improvements. It is crucial for all citizens to be
proactive in calling for change; while some demand better school and work conditions that are
illuminated with natural light, others can lobby for new control and regulation of street lights. By
coming together to recognize the severity of the sleeplessness epidemic across the nation, we can
make a definitive impact on the future through the application of optics.

Brandon is a junior studying Business Administration in the USC Marshall School of Business, and is also minoring in Video Game Design and Management in Viterbi's ITP program. He enjoys engaging in service with the on-campus service organization Alpha Phi Omega, and has served as a volunteer leader while working with kids and the homeless population in DTLA. He is also involved in the Marshall Career Advantage Program and Marshall Entertainment Association, where he hopes to gain insight into brand development in the entertainment industry. In his free time, he enjoys making art, playing the piano, and playing video games.
View all posts