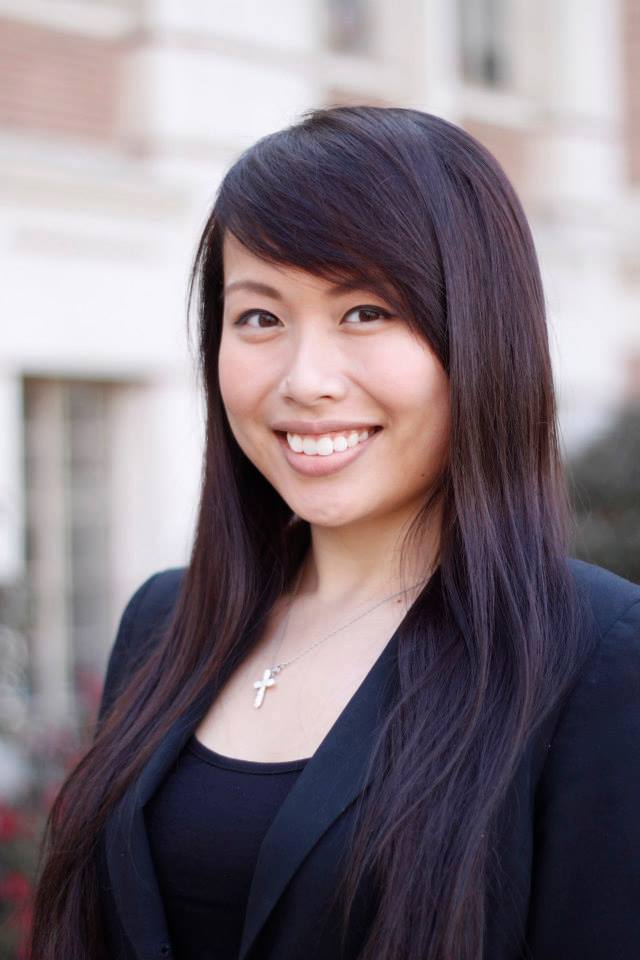 Kristy Nguyen is originally from Garden Grove, California but she has lived in Atlanta, Georgia since she was 9 years old. She is currently a junior majoring in Public Relations and is a proud member of the USC Mock Trial team. After graduation, she plans on attending law school. When she’s not studying, she enjoys exploring Los Angeles, eating, sleeping, and “netflixing.” She has been self-diagnosed with wanderlust and hopes to travel to 30 countries before she’s 30. Her favorite motto is “Treat Yo Self”

“Please don’t hurt my baby,” Donna Whitson, pleaded on the news in 1996. “She’s just an innocent child. Please bring her home safe.”(Krajicek) Donna Whitson’s nine-year-old daughter, Amber Hagerman, was kidnapped on January 13th, 1996 while riding her bike around her grandparent’s neighborhood in Arlington, Texas. (U.S. Department of Justice ) A witness reported it to the police and informed Whitson and her family. Whitson, Richard Hagerman – Amber’s father – and their friends alerted the media and FBI. Four days after the abduction, a policeman found Amber’s body, unclothed, in a drainage ditch. She was brutally murdered and law enforcements never found the perpetrator. Driven by her daughter’s death, Whitson fought for justice. She helped establish the AMBER Alert system to raise awareness and to protect children throughout the U.S. Although some scholars have criticized the system, Whitson proved that advocacy and network building can strongly influence the legislative process and leave a lasting impact.

After Amber’s body was found, the autopsy results indicated evidence of sexual assault. Whitson took immediate action and began a support team. She, Amber’s father Richard, and a family friend, Bruce Seybert established a group called “People Against Sexual Offenders” (P.A.S.O) that collected signatures in hope of pressuring the legislature for more stringent laws against sex offenders. In the summer of 1996, P.A.S.O enlisted the help of Congressman Martin Frost of Texas, who worked with them to draft the “Amber Hagerman Child Protection Act.” Frost introduced this act to the House of Representatives that included a section calling for the creation of a national sex offender registry, something Whitson was able to testify in support of before Congress. Later that year, President Bill Clinton signed the statute into law, thus establishing the National Sex Offender Registry to “provide public disclosure information about convicted persons involved in a sexually violent offense”, granting Whitson her first victory. (Cornell University Law School)

Although Whitson was fortunate to have achieved part of her goal at the national level, the question of how to alert the public of child abductions still remained. In the same summer of 1996, Seybert spoke on behalf of Whitson and P.A.S.O, at a media symposium at Arlington Convention Center. He encouraged the media and the local police to get involved in responding to child abductions by alerting the public through various means within the first 24 hours. P.A.S.O began attracting more media attention, especially from local stations around Dallas, Texas. The widespread media coverage of P.A.S.O drew the attention of one concerned Dallas resident who took P.A.S.O’s ideas and approached the Association of Radio Managers (ARMS), “[suggesting] that the police and media use the radio Emergency Alert System (often used for emergency weather information) to inform the public of child abductions.” (Horne, Pirog and Good) ARMS, which comprised of managers of major radio stations in the Dallas and Fort Worth area, took the suggestions and initiated the Dallas Amber Plan in July 1997. The plan called for collaboration between the police and media, requiring immediate release of information on child abductions, including photos and detailed descriptions through public broadcast on the radio.

Sixteen months after the enactment of the plan, a local babysitter abducted the child she was caring for and an alert was sent out. A driver heard the alert and reported seeing the suspect’s truck on a freeway and within two hours, police caught the baby sitter and the child was returned safely, providing evidence that the Dallas Amber Plan was effective. (Krajicek) Within the next couple of years, other cities began adopting the Dallas Amber Plan and worked with participating radio stations to send out alerts. By 2000, the Texas legislature had enacted the plan statewide.

P.A.S.O’s advocacy and Dallas Amber Plan garnered widespread attention, prompting the U.S. Congress to implement the alert system nationwide. In 2000, only 12 states had adopted Amber’s Plan. When California launched the Amber Plan in 2002, 13 alerts were sent out and 12 of those 13 children were successfully returned. This saw the number of participating states increase to 26. Both California’s retrieval rate and the increase in the number of participating states prompted Representatives in Congress to champion a bill calling for the establishment of the system at the national level. With the help of the U.S. Department of Justice that coordinated the programs for the different states, the bill passed in 2003. Whitson attended the ceremony when President George W. Bush signed the “Protect Act 2003” that established the AMBER Alerts – America’s Missing: Broadcast Emergency Response– in all 50 states and heightened the penalties for those convicted of child abductions and child sex crimes. The success demonstrated the strong influence of Whitson and her team, whose work on the Dallas Amber Plan led to the creation of AMBER alerts.

With the enactment of the law, authorities established certain criteria for the release of AMBER Alerts. These criteria include, law enforcement confirmation of abduction and sufficient descriptive information of child, captor, or captor’s vehicle. In addition, the child must be at risk of serious injury or death and must be under eighteen years old. (U.S. Department of Justice ) Once these conditions are met, law enforcement agents send out the alert and notify broadcasters and state transportation officials. The information provided in the broadcast includes: the name and description of the abductee, a description of the suspect, and description and license plate of the abductor’s vehicle if available. (U.S. Department of Justice ) The alerts are designed to interrupt regular programming and are distributed on radio and television broadcasters as well as highway signs. With the advancement of the system over the years, the alerts are now also placed on lottery tickets, issued on the Internet and sent through emails and cell phone text messages, making use of almost all broadcasting media available today.

Although the Department of Justice reports that AMBER Alerts have saved up to 685 lives to date, the system has come under scrutiny for some of its statistical data. Critics claim that the “alerts appear most likely to be ‘successful’ in familial abduction situations instead of the more menacing stranger abduction cases for which they were intended.” (Griffin, Miller and Hoppe) In 2004, the Scripps-Howard Research analyzed 233 alerts and found out that only 30 percent of those alerts involved abductions by a stranger. Familial abductions made up fifty percent of the analysis and runaways, lost or injured children, and hoaxes made up the last twenty percent. (Griffin, Miller and Hoppe) Another study on AMBER Alerts revealed that out of a sample of 275 alerts issued from January 2003 to March 2006, 62.7 percent of the recovery of missing children had no evident direct relationship to AMBER Alerts. Additionally, because evidence showed that majority of the children who were abducted or murdered died within the first three hours, the effectiveness of AMBER Alerts was criticized because research found that only 16 percent of abductees were recovered within one to six hours. The alerts were further criticized for their delay because of the sample cases only 36.7 percent of the alerts were issued within three hours of the abduction, at which point the child is at increased risk for injury and/or death. (Griffin, Miller and Hoppe)

This research suggested that AMBER Alerts failed to function as they were initially intended to. It also highlighted the Department of Justice’s neglect in failing to accurately report statistical data on what kinds of abductions were successful, leading to a of skewing the numbers. Furthermore, the findings suggested that law enforcement might be too hasty in distributing information due to the pressure for “faster response time”. As a result, the loss of proper verification of information may compromise its effectiveness. (Griffin, Miller and Hoppe) While some argue that the alerts are released too hastily, some suggest that they may be delayed because fact that the system is heavily reliant on participation. If the citizens do not provide adequate information, the alerts cannot be issued. This limits how quickly the public can respond because unless the alert is sent out in time, there is little any citizens can do. All these issues highlight the complexities within the system, revealing that the presence of a law with well-meaning intentions does not guarantee its flawless execution.

Furthermore, AMBER Alerts have been criticized for their overall methodology. Timothy Griffin and Monica Miller have spoken against the idea that rapid response leads to rapid recover, terming it as nothing but “crime control theater.” They argue that AMBER Alerts are only a “socially constructed solution” to make it appear that the crime is under control when in reality it is not. The construction meets the moral panic that the public has regarding child crimes  (Griffin and Miller, Child Abduction, AMBER Alert, and Crime Control Theater) They suggest that in order for the program to be truly successful, every alert would need to receive an immediate response from different participants at the same time, which is impossible. They point out that the necessity for a rapid response contradicts the necessity for the criteria to be fully met, which will always mean that anything public officials do will be relatively slow.

Along with Griffin and Miller, critics Samantha Clinkbeard and Rebecca Thomas also suggest that the alerts could create unwanted backlash. They claim that by issuing an alert on such a publicized scale, the “program could prompt copycat crimes from perpetrators seeking publicity.” (Miller, Griffin and Clinkinbeard) This could result in local enforcement wasting time on wild goose chases. Other critics also point out that the abductors might kill the victims immediately after seeing the alert to avoid being found. These implications suggest that the AMBER alerts might cause more damage in certain cases than actually helping the children.

Although criticism reveals the program’s flaws and inconsistencies, it does not take into account the fact that imperfections are inevitable consequences of any new system. For instance, the research based on selected samples only provides averages and includes theories of potential repercussions that have not surfaced as actual phenomena. Such criticism fails to consider that new laws and protocols have room for improvement and can sometimes take time to be implemented effectively. In addition, while critics rush to point out the current system’s inadequacies, they fail to acknowledge the fact that before the creation of AMBER Alerts, there was no way to immediately notify the media and public following a child’s disappearance.

Nevertheless, any criticism brought forth regarding the current system cannot take away from Whitson’s pivotal role in creating a program that would leave a lasting impact. Her efforts started locally but with the help from her family, friends, and other advocates, resulted in the creation of an alert system that was not only implemented nationwide, but has since expanded internationally to Canada, Mexico, Australia, and various countries in Europe. Whitson, an ordinary woman who experienced a great tragedy turned that tragedy into motivation in order to help other children. And while the law created as a result of her efforts may not be perfect, AMBER Alerts have allowed her to accomplish her goal of raising awareness regarding child abductions. AMBER Alerts now use every broadcasting medium possible to inform the public, something impossible prior to the system’s creation. And just as the alerts have evolved over the years so too can the law that governs how they work can continue to be improved and adapted.